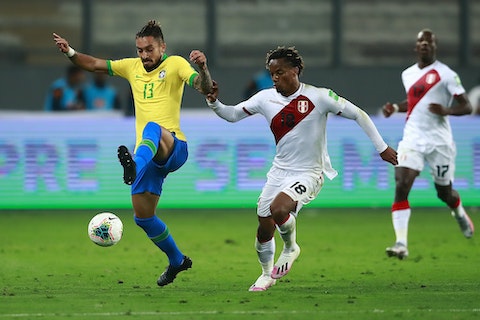 Manchester United left-back Alex Telles tested positive for coronavirus again on Saturday, according to Globo Esporte. A separate report from UOL backs this claim up…

If Telles tests positive again later today, he will be removed from the Brazil as he would not be allowed to travel to Uruguay.

The above has been explained by Brazil and Latin American football correspondent, Paul Freitas, formerly of Sky Sports.

Uruguay host Brazil in a World Cup qualifier on Tuesday night at 11pm.

Earlier in the week another positive case showed up within the Brazil national team, which could have implications for a number of Premier League footballers.

Who involved with international football thinks it’s a good idea to commingle players from various bubbles?

Hot post  Set up to fail? Man Utd lose Shaw for one month with hamstring injury

As confirmed by Brazil national team doctor Rodrigo Lasmar, Palmeiras midfielder Gabriel Menino has tested positive. The 20-year-old is symptomatic but had been training alongside the rest of his team-mates all week.

We won’t know anything definite until Telles takes another test for COVID-19, which is expected today.

This could also a blow to his preparations with United and with Luke Shaw injured I doubt Ole Gunnar Solskjaer is going to react too well if his new left-back’s recovery is pushed back a further two weeks.