Liverpool legend Jamie Carragher has suggested that Manchester United should ‘take’ the ‘money’ and sell Paul Pogba, with the Sky Sports pundit admitting he doesn’t see the midfielder as a ‘great’ player. 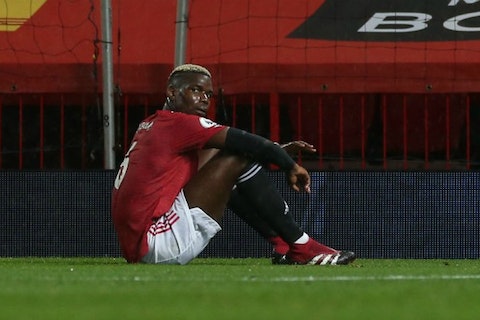 The 27-year-old, who is one of the biggest stars in world football, has had his future questioned once more by the media, with Pogba enduring a difficult season so far.

Pogba has started just five of his 11 appearances across all competitions so far this term, with it clear that Ole Gunnar Solskjaer finds starting the Frenchman and Bruno Fernandes together as difficult.

A midfield pairing of Fred and Scott McTominay or Nemanja Matic has recently been favoured, in a move that allows Fernandes total licence and freedom as the side’s playmaker and supports a shaky defence.

Here’s some of what Carragher had to say on Pogba’s time at United and his future:

“In some ways you could say everybody’s unhappy with his position, the fact that we’re still talking about what is Paul Pogba’s best position? – when he’s been at the club for four years – I think tells you that he’s possibly never done well enough in any position or tactical setup that different managers have had.”

“For me when I look at it now, would I pick Paul Pogba in the Manchester United team – I wouldn’t. no, I think he’s a huge name, he’s come from a huge transfer fee, but I don’t think that he’s a great player.”

“I think when I say that, I’ve said it on different times on Monday Night Football, people say ‘he’s won the World Cup’ – and I get that, I understand that’s an argument to throw back at me.”

“I think he’s been in our league, when he came in… I thought he may have the impact of what Lampard with Chelsea, what Stevie (Gerrard) had with Liverpool, what Yaya Toure had with Manchester City.”

“Those players drove their teams to titles, European cups. When you came for Man United as the world transfer fee, I know you could say that the other players aren’t great or this manager or that.”

“When you’re that man whose seen as the one to take United to the next level – which is getting back to winning titles and European cups – people might say that’s too much pressure to put one man, but that’s what we were almost told was coming.

“This package, most expensive player in the world, he can do everything in midfield, he’s done it for Juventus, he’s played in the Champions League final for them – and it just hasn’t happened for him at Manchester United.”

“I’d be looking to take money for Pogba.”

France boss Didier Deschamps even recently commented on pogba’s rough patch with United, adding that the central midfielder is in a situation in Manchester where ‘he cannot be happy’.

The Red Devils re-signed Pogba in the summer of 2016, years after he left the club’s academy to kickstart his career with Juventus, with United shelling out a then world-record fee of £89m (BBC).

Pogba has largely been inconsistent for the side, with the midfielder’s best performances of his career actually coming for France as they won the World Cup and nothing really as close for United.