Am I crazy thinking Manchester United could win their next five games? 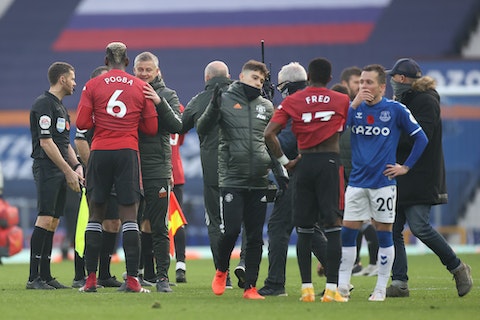 It all starts on November 21, 2020, when West Brom come to Old Trafford. Stretford End Flags last night revealed plans to unveil a Nobby Stiles tribute banner for the game.

That is followed by a UEFA Champions League matchup against Istanbul Basakeshir at home. They’ve already beaten us in the group stages but that was one of the worst displays seen under Ole Gunnar Solskjaer.

This team is now being tasked with consistency problems and need to fix them after beating Everton 3-1 at Goodison Park prior to the November internationals.

On November 24, United travel to Southampton, who have shown great form since the season began. Ralph Hasenhuttl is a great coach and deserves enormous credit for the job he’s done at St. Mary’s.

United’s first game in December, on the 2nd, sees Paris Saint-Germain come to Old Trafford. Hopefully we go into that fixture on the back of good form and do the double of the Ligue 1 champions.

And the last game we’re going to look at (for now) is West Ham away on December 5.

Nine points from these three league games is a must.